The environment had been in use for 10+ years and had, over the past two years, experienced a steady decrease ineffectiveness resulting from both internal and external pressures. In the past year alone, sales were down 20% and sales efficiency was down 26%.

Management of the calling operations was generally left to the operations team supplied by the outsourcing vendor. The marketing and vendor management teams worked at a strategic business level and did not have either visibility into the fundamentals of the operation nor control over the day-to-day tactics.

Massini Group initially was tasked with assessing the challenges that were resulting in both below plan performance and the decreasing level of effectiveness over time. The initial study found that:

A. Profile data suggestive of the best date and time to call were not being employed;
B. The call center operations team had adopted an ad hoc target management methodology focused on capacity utilization rather than on results optimization;
C. Calling resources (dials) were non-uniformly distributed across the targets, resulting in a small proportion of the targets being over called while the remainder of the targets were under called;
D. Limited technical call queue management capabilities required that a trade-off be made between good time-based follow-up practices and overall team calling productivity.

The report triggered a very common and pertinent question from the marketing and vendor management teams, “Shouldn’t the vendor be able to do something about this?” The answer is generally no, for two reasons:

1. The margin pressure caused by the highly competitive telesales outsourcing/off shoring markets has driven fundamental skill sets and advanced tools from the vendor pool – the less you pay for a telesales agent, the more probable these types of problems will be;

2. Many times, the answer to the problem puts the interests of the client company and vendor in conflict – for instance, if it involves eliminating unproductive agents or reducing the size of the team – an expert and objective third-party is needed to assure client interests are respected.

Assignment
Massini Group was tasked with the following objectives:

A. Provide the client marketing and vendor management teams with the tactical visibility needed to fully assess the performance of the program relative to best practices benchmarks;
B. Fix the program – get it above goal and minimum corporate ROI requirements;
C. Organize the effort so that it would be both predictable in terms of cost and sales as well as sustainable over time.

Massini Group’s overarching strategy for optimizing the efforts of this call center was to help the telesales agents move up and stay up the learning curve by normalizing the challenge, or in other words, turning the effort from a complex, multi-faceted endeavor into a methodical sales assembly line by simplifying the targeting, campaigns, processes and technical environment.

Massini Group attacked normalizing the challenge from a number of perspectives, including:

A. Assuring that the composition of the targets was consistent from day to day for the span of an entire month;
B. Applying a structured calling methodology so that all of the targets would be treated in a uniform fashion, further making consistent the workload for each agent on each day;
C. Breaking the sales process down to fundamental components using a proprietary set of cascading performance metrics that directly link quantitative measurements to tactical actions and then prioritizing one improvement at a time.

Since telecommunications services are generally sold on a contract basis with a one- or two-year term, it was well understood the expiration of the contract played an important role in the availability of a target to be converted into a sale.

Massini Group used 18 months of attempt and sales history to peg the likelihood of sales success relative to the month the competitive contract was expected to expire.  The analysis showed that calling at the correct time could reduce the cost per sale by as much as 37%. Further, it was determined 58.6% of all dials were happening at inopportune times to make a sale.

Based on quantitative benchmarks on 1,000’s of telesales campaigns, Massini Group knew that the probability of success was also heavily influenced by the outcome of the last call.

Using these two attributes and a few other related to size and type of the opportunity, Massini Group was able to map out the entire marketing universe and place each target into a cell matrix based upon like values across all of the pertinent attributes.  This structure was then used to select targets for each month of the year. The selected targets were then further selected to develop representative samples for each day of the month, allowing that the composition of the targets be held consistent throughout the term of the month-long campaign.

Massini Group then again used analysis of its library of benchmarks to mathematically model how many targets and agents would be required to keep the call center fully occupied for the number of days in each month. Selecting to the output of this model assured that the center would never run short of targets, but also completely process all that were selected.

Next, Massini Group worked with the operations team in the call center to make adjustments to the call queuing methodology to assure that the targets were dialed in order through each of the representative samples selected, assuring that the composition of each daily batch of work was statistically identical to each other. All of the selected records were dialed once before any one was allowed to be dialed a second time unless a specific appointment had been made with the decision-maker.

As confirmation this was working as expected, the daily sales figures began to run within a range +/- 5% of the projected number.  In the first month of operation for this methodology, the sales numbers were up by 17% from the previous month’s averages and overall sales process efficiency was up by 51%.

Now the program was ready for optimization using structured tactical metrics analysis. Based on a proprietary Massini Group structure, Massini Group disassembled the effort into 13 key operational parameters and cascading performance metrics. Using in-depth statistical analysis on 1,000’s of quantified benchmark cases, Massini Group was able to establish causal relationships between each of these metrics and specific tactical adjustments needed to the process.

This approach isolated a number of deficiencies that were robbing the program of sales performance. Based on the overarching mathematical model for the process, Massini Group was able to prioritize the improvements needed, and address them sequentially in such a way as to not overwhelm the telesales agents or their supervisors. In fact, detailed examination of the root causes of some of the deficiencies with the operations managers and sales team leads uncovered a number of technological impediments to optimal execution that made the most obvious modifications impossible.

Ultimately, the final process was engineered to work around the technological impediments in the call center infrastructure, but still improve individual metrics considerably. The end state for the sales process exhibited not only increased sales performance and efficiency, but also predictability and sustainability over time.

All of this formed a firm foundation for an on-going champion/challenger testing process that supports on-going process, methodology, message, offer and product mix optimization that has built-in baselines for comparative decision-making.

Compared to average baseline measurements built in the first months of the sales process improvement initiative, the program presently runs at a level of 174.1% on sales and 173.4% on lines and 170.0% on overall sales efficiency. This represents the improvement from the minimum sales performance point.

Compared to same month previous year, the program runs at an average level of 146.4% on sales, 152.9% on lines and 146.8% on overall sales efficiency, representing getting more sales with fewer agents in alignment with the size of the overall marketing universe.

This article is provided by Massini Group.

Check out Massini Group's exhibitor page here! Like what you're reading? Get your Free Ticket now and come visit Massini Group at booth# 1918 at The B2B Marketing Expo! 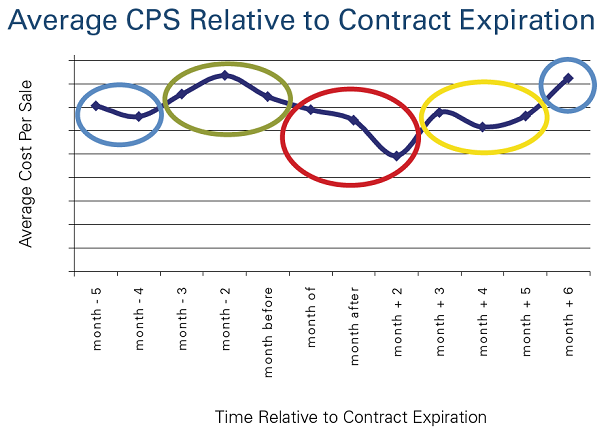